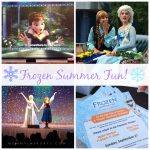 It’s officially fall at Disney and you know what that means….the end of Frozen Summer Fun. (cue the sniffles) We were able to see the Frozen Sing-Along at Disney’s Hollywood Studios in Orlando just before the show ends on September 28, 2014. It was part of Disney’s Frozen Summer Celebration that started on July 5, 2014. Read Post