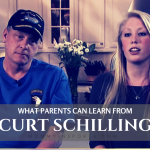 The news on television, sports talk radio and the web this week has been centered around Curt Schilling, former Red Sox pitcher and his daughter Gabby. A former athlete and proud father tweeted out a congratulations to his daughter about her softball scholarship….and some of the responses he received were vulgar and downright terrifying.  The disgusting tweets Read Post